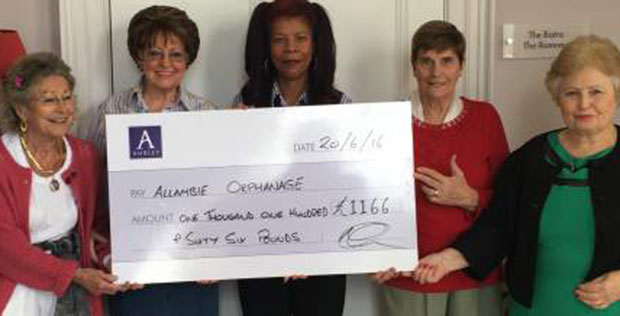 Owners and staff at Audley Mote House, the luxury retirement village based in Bearsted, Kent, have raised over £1,000 for a Vietnam orphanage.

Suzanne Hook, Food & Beverage Supervisor at Audley Mote House, recently returned from Vietnam where she spent five years setting up and establishing Allambie Orphanage in Ho Chi Minh.  A survivor of the Vietnam War herself, Suzanne Hook was abandoned as a baby on the streets of Saigon; she was raised in an orphanage in Saigon and was then adopted by an English family and flown to England in 1972 and given a second chance of life. Suzanne set up Allambie Orphanage so that she could give other abandoned children and orphans the same opportunities that she had been given.

Inspired by her story, owners at Audley Mote House decided to hold a Book & Craft event to raise funds for the children of the orphanage. To date, the owners have raised £566.50, and with Audley agreeing to match the fundraising effort, the village has raised a grand total of over £1,133 for Allambie Orphanage. The money will pay for uniforms, school bags, school shoes, school books and stationary for almost a year.

Suzanne Hook, founder of the Allambie Orphanage commented: “This is a cause that is so close to my heart. The team in Vietnam and I have been truly touched by the generosity of both the owners and staff at Audley Mote House.  I also want to thank Audley Retirement for match funding the donations which means that over £1,000 will go directly towards helping the children and providing invaluable support to our long term mission of educating the Allambie children so they can ultimately get their own jobs and live independently.”

Philip Urquhart, Village Manager at Audley Mote House said: “Suzanne is a highly valued member of the team at Audley Mote House and she has done an incredible job of improving the lives of children in Vietnam. There was no question of us not getting involved, and it’s heartening to see owners and staff involved in the fundraising effort. The planning has already started for the next event which will take place at Christmas.

You can find out more information about Allambie Orphanage via the website - http://www.allambie.co.uk/.